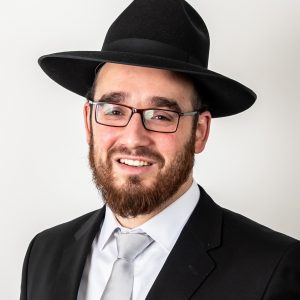 As Director of Certification of KF Kosher, Rabbi Guttentag is responsible for Federation’s industrial Kashrus work. His responsibilities include liaising with our worldwide portfolio of Kosher certified companies. He is also responsible for the digitisation of the department’s activities and for the roll out of our bespoke Kashrus CRM  – KF Connect. He actively trains and mentors all members of his team to strive for the highest levels of professionalism in Kashrus administration.

Having risen through the ranks of ShailaText which he joined in 2015, Rabbi Guttentag’s creative problem solving has led to the initiation of a number of the Federation’s flagship projects. He founded and directs FedTech (department for halocho and technology) and spearheaded the launch of the MaaserText and Mechiras Keylim initiatives.

He is the son of Rabbi Jonathan Guttentag Shlita and son-in-law of Federation’s Emeritus Rosh Beis Din Dayan Yisroel Yaakov Lichtenstein Shlita. His family background – as well as 15 years learning in Yeshivos and Kollelim in the UK and Eretz Yisroel, have fuelled (and served as the catalyst for) his interest and expertise in the intersection between Halocho, technology and industry.

He received Semicha on extensive parts of Yoreh Deah and Orach Chayim, with a particular focus on areas of practical halocho. He also received extensive shimush (mentoring) in Taharas haMishpocho and in the fields of Shechita & treifos, qualifying as a shochet and Rav HaMachshir. Before joining the Federation, he served in a leadership role in Whitefield Community Kollel, and developed significant rabbinic / communal experience.

In September 2020, Rabbi Guttentag took on an additional role as Rov of Kehillas Eitz Hachaim in Edgware.